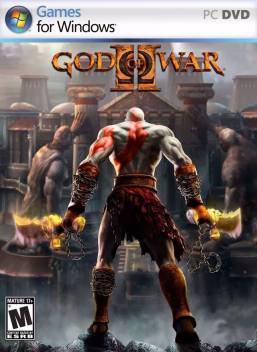 On Game:
overthrowing the war god Ares and took his throne, Kratos achieved his goal, but for such a daring deed had to pay a heavy price. Brave son of Sparta has inherited from the merciless god not only the strength and power, but absorbed all the cruelty and the wrath of the infinite dark lord. Now Kratos he brings down on the land of ancient Greece unprecedented misery and damnation, plunging the once beautiful world into chaos, against which the pale machinations of the Ares.

Kratos is armed with two swords of chaos, chained to the hands of the hero. The long and dangerous journey awaits Spartan.
Combined motion, techniques and strokes has never before been so cruel and unrestrained fury. Any attack Kratos can result in a bloody river, a raging torrent which dries up just when we have defeated all the enemies to the last.
traveling Kratos meets Medusa, Cyclops, Minotaur, Harpy, Titans and other mythical creatures and monsters. You will receive the Aegean Sea, Athens, the kingdom of the dead, the desert of lost souls, Olympus and other places and characters familiar from the myths of ancient Greece. The player will have to climb the mountain cliffs, swim rivers, climb the steep wall, fighting against thousands of enemies and solve puzzles.
During the game, Kratos will learn dozens of magic spells - with their help at critical moments in a soldier can call for help of the Zeus smite enemies electrical discharges, and pay the monsters in stone overlooking the severed head of Medusa the Gorgon.

Features:
To what would get rid of the commercials should be hovering in the game (during ROLLER !!!!!!! 1) stop the game (the button esc) to come in " stuff "out there in the archive of patches, and already there click" skip MPEG ". Emulsion to say that "patch found" and after clicking on the "OK" button to add a line of text. We will have to activate it Bodo click "Enable / Disaable" (by pushing the line). So here we have all done so that we close the window. Now we need a menu "Others tick" Use of patches. "
Everything is made
to play on. Then will need to disable skipping commercials
IMPORTANT: to reach the near conservation to save the game and restart the emulator - it is necessary to avoid different moments in the game in which the further passage impossible (where for example the door will dig the texture will be lost, etc.) You must be registered for see links
التفاعلات: mohammed1996


You must be registered for see links
، فالموقع لا يفتح نهائيّاً.​
S